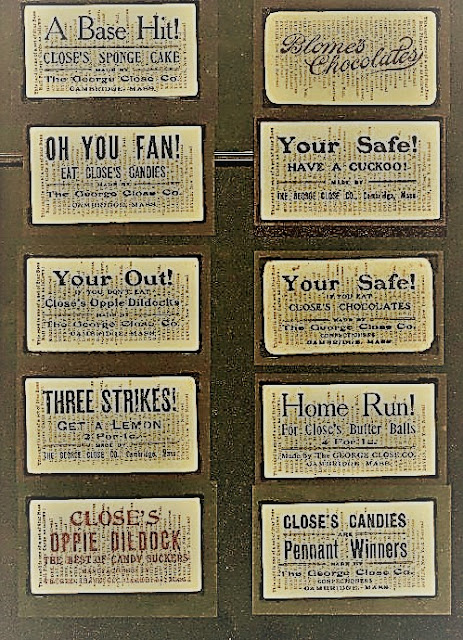 Examples of some of the possible overprints available on the backs of the 1911 George Close Candy E94 baseball cards.

* Image was available for several sources on the internet, and was taken from the net54 forum.
Posted by Dean at 10:15 AM No comments:

Although summer is drawing to a close, the discovery of another one-hundred-year-old gem keeps excitement in the air at Dean’s Cards. Only several weeks after discovering a rare Ty Cobb promo card, one of three in known existence, another item in our possession featuring the likes of the once famous actor J. Warren Kerrigan has proven even more scarce. According to a feed on Net54’s Vintage Non-Sports Forum, the card, identified as a 1914 T222 Fatima, was not thought to have existed until less than one year ago, when the first of its kind surfaced and sold on eBay. This discovery here at Dean’s Cards is the first since then, making ours only the second known example of this uncataloged relic.

Better yet, this item’s background does not fail to live up to its rarity, as the stories behind Kerrigan, whose immense fame was followed by a sharp decline, and the 1914 T222 Fatima set combine to pack a fascinating punch.

The silent film star you have never heard of grew up in Louisville, Kentucky, splitting his time between hunting and reading Shakespeare. Although making his start on Broadway, Kerrigan did not obtain fame until appearing on the big screen and quickly experienced immense fandom. By 1910, he was believed to have over 40 million followers, and a few years later the film magazine, Photoplay, wrote an article titled, The Great God Kerrigan, (see page 41) which discussed the star’s preference of the great outdoors over the Hollywood party scene as well as his love for his mother. When asked why the twenty-six-year-old, widely known for his good looks, was not yet married, Kerrigan was quoting as saying, “I don’t think I would ever be very likely to find a woman as good as my mother.” Years later it became known that the mama’s boy was in fact homosexual.

Despite this quick rise to stardom, one poorly thought out statement brought everything crashing down in May of 1917, only one month after the United States formally entered World War I. Kerrigan, upon being asked whether or not he would enlist in the military, stated he would not serve since the army should first take, “the great mass of men who aren’t good for anything else.” The American public proved to be unforgivable in a time of war, and the golden boy of the silent film era was immediately ostracized. Although he eventually managed to star in a few popular films in the 1920’s, Kerrigan never again experienced his former popularity and lived out a private life with his mother and partner. If the usually charming Kerrigan had refrained from making this statement more of us would probably know his name today.

Not to be outdone, the circumstances of Kerrigan’s inclusion in the 1914 Fatima set are compelling in their own right, as T222 is mostly known as a baseball card set. The sixty-three card set, now sixty-four with the addition of Kerrigan, features fifty-two baseball players, with the remainder of the seemingly misplaced cards depicting other athletes and movie stars. The set is considered complete amongst most collectors with only the fifty-two ball players, leading many to wonder why twelve random celebrities appeared alongside the likes of baseball legends Walter Johnson and Rube Marquard.

The answer to that question begins with the Liggett & Meyers Tobacco Company of Huntington, West Virginia, now a subsidiary of Liggett Vector Brands, one of the largest tobacco companies in the United States, and their decision to print glossy paper cards for distribution with packs of their Fatima Blend Cigarettes. The 1914 set was a follow up to the company's apparent experimentation with baseball cards in 1913, as three different sets of baseball photographs were included with their tobacco products over the course of the year. Of these three products, two featured team pictures of professional clubs, the 1913 Fatima Team Cards (T200) and the Fatima Premiums. However, the 1913-1915 Fatima Posters depicted a single player, and seem to have been the most popular product, as they continued to print them for two more years. This may have urged Liggett & Meyers to combine the convenient size of the team cards with the depiction of a single player, resulting in the birth of the 2 ½” x 4 ½” images in 1914. The company apparently felt a need to step up their game to an even greater level, as the decision was made to include other athletes and movie stars in addition to baseball players. The back of each card describes the set as a “Collection of 100 photographs of famous Baseball players, American Athletic champions and Photoplay stars”. You can see the checklists for all of the Fatima sets on pages 166-67 in the 6th edition of the Standard Catalog of Vintage Baseball Cards.


Although Liggett & Meyers planned to print one hundred different cards, the West Virginian tobacco boys must have made a last minute realization that baseball cards were the most popular product, as it appears they ordered a halt to the production of the non-baseball cards before the set was completed. According to The Cardboard Connection, there is a reason to believe more photoplay star photographs from 1914 Fatima will emerge in the years to follow. Regardless, we’re lucky the production of these photographs was terminated just late enough for a few Kerrigan cards to slip their way into cigarette packs. Who knows, there are probably a few more out there waiting to be discovered.
Posted by Dean's Cards at 12:12 PM No comments:

Last week an exciting discovery was made deep in the dungeons of Dean’s Cards. As Dean’s son, home from college, I was given the task of researching this unique Ty Cobb card, a relic previously undiscovered. When Dean first acquired this artifact over ten years ago, he knew it was old and most likely rare, but remained unsure what he had on his hands. After several experts admitted they had never seen anything like this item before, Dean hesitated from releasing it to the market. As a result, this cardboard depiction of the 4,000 hit club’s founding member sat on a shelf and waited ten more years until its mysteries were finally unraveled.


According to our research, Philadelphia Caramel expert Erik Varon recently discovered a nexus between this lookalike E95 Ty Cobb card and a Philadelphia Caramel Company advertisement issued circa 1910. Varon concluded this card was cut from an ad similar to the one pictured below, which was probably distributed to convince potential vendors to carry the company’s soon to be released baseball cards. This would make this item one of the earliest known promo cards. These 1909 Philadelphia Caramel cards were later designated by collectors as E95’s, and feature twenty-five stars of the day including Cobb. While our find may appear almost identical to the E95 Cobb card, further inspection will reveal that the lettering was enlarged and moved from the bottom margin to above Cobb’s head, probably to make the image more suitable for a larger print.

The most peculiar part of this card is the jumble of wordage featured on the backside, the characteristic which enables the item’s identification. While the front of the ad featured Cobb, the backside described the company’s caramel and other products with phrases like “jelly confections” and “soft cream centered chocolates”. These words match up almost perfectly with the Philadelphia Caramel Co. advertisement mentioned above.

As learned from an online forum, the ad included a second promo card beside Cobb featuring prizefighter Jim Jeffries, who came out of retirement to challenge the 1908 Heavyweight Champion, Jack Johnson. The Philadelphia Caramel Co. simultaneously released a set of boxing cards, later designated as E79’s, since baseball and boxing were the two most popular sports in the United States at the time. When the backsides of the two cards are placed side-by-side they fit together like pieces in a puzzle.

Unfortunately, the full advertisement will likely never be found, as these cut-outs are extremely rare on their own. To our knowledge, this Cobb card is only one of three in acknowledged existence, making it the rarest item ever stumbled upon at Dean’s Cards.

One of these sold through Heritage Auctions in 2009, with the item description reading, “Until the full piece is discovered, this lone remnant will remain as our inspiration to keep searching those dusty attics and flea markets looking for long forgotten treasures.”

Our find is not only another remnant of this lost treasure but is in much better condition than the item sold eight years ago. Dean’s Cards will most likely auction this rare piece of history on eBay later in the month, but for the time being, we remain too caught up in the excitement of discovery to consider a starting price.

We hope our discovery will encourage others to join this Crusade to uncover further artifacts of America’s greatest pastime. After all, discoveries like this are one of the many pleasures of our favorite hobby and yet another reason why grown men still play with baseball cards.

If you would like to read more about the Philadelphia Caramel Company, check out Erik Varon's new book, Jakob's Story and the American Dream, recently released on Amazon.