***The information in this article was used to write our ebook, Before There Was Bubble Gum: Our Favorite Pre-World War I Baseball Card Sets.  To purchase the ebook, please click here.***

DeansCards.com has been lucky enough to see several collections that include T204 Ramly baseball cards.  Although they are some of the most intricately designed cards that were produced in the Pre-War era, these cards not exceedingly popular with collectors.  The gold ink tends to flake easily and, more importantly, some of the bigger stars were not included in this set. 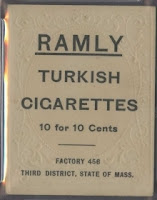 The T204 cards were printed in 1909 by the Mentor Company, located in Boston, and then inserted into packs of Ramly Turkish cigarettes.  The photographs of the players were  taken in the studio of the famous baseball photographer Carl Horner.  The T204 cards were heavily influenced by the Boston baseball scene.  The two Boston teams, the Red Sox and the Doves, are the best represented in the set, while other teams were left out entirely.  The White Sox, Phillies, and Pirates were all left out of the T204 set.  There are 121 cards that measure 2” by 2½” total in this set and three different back variations.  The Ramly advertisement is the most common, but blank backs and T.T.T. cigarette ads also exist.  T.T.T. cigarettes were another brand of Turkish cigarette manufactured by the Mentor Company. 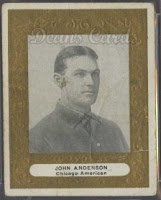 Interestingly enough, the Ramly cards do not include some of the biggest stars of the time.  Ty Cobb, Christy Mathewson, and Cy Young are all omitted from the set.  Some of the stars that were included are Walter Johnson and Eddie Plank.  It is not known why the Mentor Company left some of the most popular players out of the set.
The T204 Ramly set also has a sub-set or variation set that consists of six cards with square, instead of oval, frames.  All of the square-frame cards have blank backs and all are very difficult to find.  They are at least ten times more expensive than the oval-framed Ramly cards.  The square-frame Ramly cards also have filled frames, instead of a white background behind the gold ink.  DeansCards.com has had one square-frame Ramly in stock - a John Anderson in Poor condition.
The T204 Ramly baseball cards are a unique set that can be difficult to collect.  If you are interested in selling T204 Ramly cards or any Pre-War baseball cards, please click here.  If you are interested in our current inventory of T204 Ramly cards, please click here.
Posted by Blog at 4:00 PM