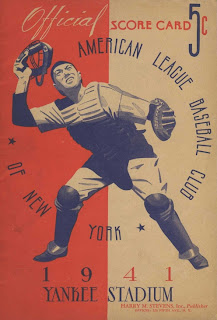 We just got a collection in that had a ton of rare scorebooks and programs from the 1940's to the 1960's and featured many different teams from both the minor and major leagues. Although many of the different programs and scorebooks were very interesting, we found two that were unique.


The first one is a 1941 Yankees scorebook from a game played July 6, 1941 against the Philadelphia Athletics in Yankee Stadium. The scorekeeper apparently attended or kept score for only the first half of the double-header that day. This game was significant because it was game #47 in Joe DiMaggio's 56-game hitting streak. The scorekeeper correctly noted that DiMaggio was 4-for-5, with the final score 8-4 Yankees, in the game. 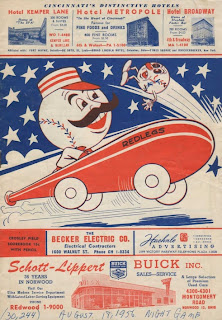 The other scorebook that we enjoyed is from the 1956 Redlegs season. The scorecard is dated August 18, 1956 against the Milwaukee Braves. In this game, the scorekeeper recorded only the final box scores and inning totals. The Reds won, blowing out the Milwaukee Braves 13-4 at Crosley field. The lineups for each team are probably the most impressive part of this scorebook. The Braves have Hank Aaron starting in right field and Eddie Mathews at third, while the Reds have Ted Kluszewksi and his biceps at first and rookie Frank Robinson in center field. One of the most interesting aspects of the scorebook itself is actually on the bottom banner ads on the front cover. The Schott- Lippert Buick dealership was partially owned by Charles Schott, who was married to future Reds owner Marge Schott. Marge was a Reds fan her entire life, but would not buy even minority interest in the team for another 25 years.