We were sorting through a box of Non-Sports cards yesterday and we happened to find an uncut sheet of 12 cards that had actresses, Presidents, military generals, and baseball players, including Babe Ruth. With a little research, we realized that we had a sheet of 1923 W515-1 strip cards. While most of the actresses, generals, and Presidents are not particularly popular with collectors, the Babe Ruth card is one of his most interesting cards. The W515 strip cards come in two different varieties: W515-1 and W515-2. The two varieties look very similar, have the same checklist, and have the same price. The only difference between the two is the size of cards (the W515-1 cards are slightly smaller). When in strip form, the W515-2 cards have the phrase "The Little Wonder Picture Series" at the top. 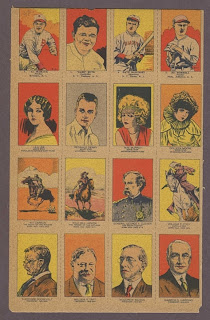 W-cards, or strip cards, were intended to be cut into individual cards, either by a shopkeeper or the kids themselves. Strip cards are one of our least popular Pre-War cards because it is so hard to find them in nice condition. However, when a strip card is found in strip or sheet form, it becomes much more collector-friendly.

The Ruth card itself is a close-up of his face in front of a bright red background. The consensus here at the DeansCards.com office is that this illustration doesn't really look much like the Babe. It's really amazing that we found this sheet of cards floating in a pile of Non-Sports cards and we hope to make more rare discoveries just like this.
Posted by Blog at 3:36 PM