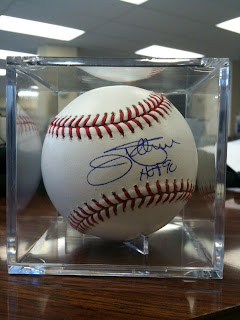 Last night at the Green Diamond, I got the chance to meet Jim Palmer and he is definitely one of my favorite speakers of the year. He spoke for at least an hour and a half and even signed a ball for me.

The entire decade of the 1960's had so many great pitchers that I often forget how talented Palmer was. In his 19 season career with the Orioles, Palmer won the AL Cy Young Award three times (finishing second twice), was named an All-Star six times, and won the Gold Glove Award four times. And, most impressively, Palmer was also the answer to the trivia question last night - who is the only pitcher to win a World Series game in 3 different decades?
Posted by Blog at 4:12 PM