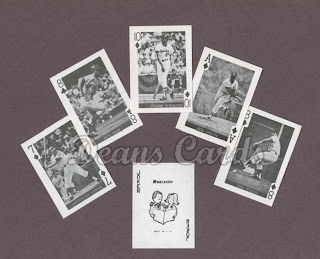 One set that people often ask us about is the 1969 Globe Imports Playing Cards set. It features many of the most popular stars from the late 1960's, including Pete Rose, Brooks Robinson, Bob Gibson, and Willie Mays, among others.

This set is so unique because the cards were actually printed on traditional playing cards. The players black-and-white action shot was just placed in the center of the card. We were also surprised by the size of the cards. They are very small, measuring only slightly larger than a postage stamp (their actual measurements are 1-5/8" by 2-1/4").

One of the most interesting aspects of the Globe Imports set is that there were several different variations that are included in the master set. For example, the Ace of Spades can be Don Drysdale, Mickey Mantle, or Ken Harrelson.
Posted by Blog at 4:30 PM