Today baseball fans can celebrate a very peculiar anniversary.  On this day seventy-seven years ago, Joe Nuxhall became the youngest player to play in a modern era major league baseball game- at the ripe age of 15 years old.

During the ninth inning of a 13-0 rout at the hands of the St. Louis Cardinals, a boy six weeks shy of his sixteenth birthday, was called from the bullpen for mop up duties and retired the first batter he faced.  But the rest of the inning didn't go as well.  Unable to escape the ninth unscathed, Nuxhall faced walked five batters, gave up two hits, threw one wild pitch and five earned runs.  He faced nine batters, retiring two, before the Reds were forced to bring in Jake Eisenhart for the final out in the ninth.  Needless to say, Nux had better days on the job over the next 60 or so years of his career, both as a Reds player and then broadcaster. 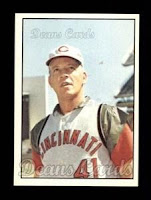 Like a lot of collectors, we here at Dean's Cards.com find it very fascinating to look back on the careers of our favorite ballplayers through their baseball cards. Interesting, despite pitching in a game in 1944, Nuxhall didn't immortalized on a card until the eight years later in 1952.  Perhaps he couldn't get the time off from high school.  Unfortunately for collectors, that day didn't come until the still fresh-faced Nuxhall debuted his 1952 Topps #406 rookie card.  As a seasoned veteran approaching the end of his playing career in 1978, Nuxhall did finally look a little different than he did as a boy who left his unique mark on history.

To take a journey through the careers of your favorite players through their cards, please click here.
Posted by Blog at 4:57 PM