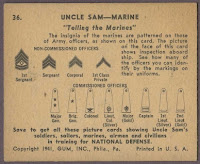 The best thing about owning a card store is that you never know what is going to come through the door or who you are going to get to meet.  Recently a local guy  came into the office and brought us about 500 UncleSam/Home Defense cards, as well as a complete set of cards #1-120. DeansCards.com buys well over 500 collections a year, but this one was particularly fun for me because the seller told me about collecting the cards as a 8-year-old and his impression of World War II as a boy..
With the success of their 1938 Horrors of War set, Gum, Inc decided to issue yet another war-themed, bubble gum card set.  Thus in 1941, Uncle Sam & Home Defense cards first appeared on the market.  These small cards measured 2 ½” by 3 1/8”, and were issued in two separate subsets.  The “Uncle Sam” set was issued first, and is comprised of cards #1-96, while the “Home Defense” set followed, as it consisted of cards numbered #97-144. 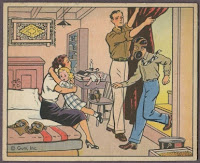 The “Uncle Sam” set focuses on the United States’ four military branches: the Army, Navy, Air Force, and the Marines.  With this set, Gum, Inc. decided to focus less on the atrocities of war (much like they did in their Horrors of War and War Gum sets), and instead focused on the vigilance of the U.S. in the face of warfare.  With that said, kids and collectors often shied away from this set, which they deemed bland and boring compared to the other popular sets of the day. 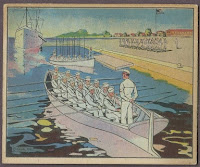 “Bland” as it may be, the “Uncle Sam” set proved to be very useful with the imminence of America’s entry into the war overseas.  The artwork on the cards in this first series was reproduced in two books entitled “America’s Army” and “America’s Navy”, published by Rand McNally in 1942.  The cards also sparked patriotism, as storeowners hung sheets of uncut cards in their windows to show their American pride.  Planters Peanut’s produced premium booklets which featured illustrations of the cards as well. The second half of the set, the “Home Defense” portion, is more costly to collect when compared to the “Uncle Sam” cards.  As the “Home Defense” cards rolled off of the printing press, Americans were being sent off to war.  Thus the paper and ink used to make the cards was rationed for the war efforts, resulting in fewer cards made.  Cards numbered 97-120 cost on average twice as much the first 96 cards in the set, while the final 24 cards in the set cost hundreds, if not thousands, of dollars to collect. 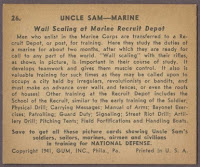 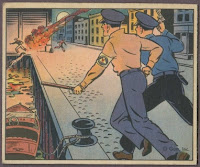 Although the war was confined to the continent of Europe when the Home Defense set was issued in 1941, many Americans feared violent attacks would occur here on US soil.  Thus the 48 Home Defense cards depicted precautionary activities and measures that must be taken, should an attack be carried out on the US mainland.  Card #125, “Individual Defense Against Incendiary Bombs” for example, depicts the proper course of action that women and children should take, should an incendiary bomb be dropped on their homes.
Today we count on the internet and televised news programs to keep us abreast on the battles being fought overseas, as well as the proper precautions to take both at home and abroad.  However, in 1941, televisions were scarce and the internet was non-existent.   Thus the Uncle Sam and Home Defense trading card sets proved to be useful as well as patriotic to the American masses.
Posted by Blog at 3:10 PM